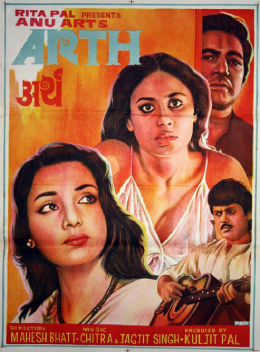 Arth (English: Meaning) is a 1982 Indian drama film directed by Mahesh Bhatt, starring Kulbhushan Kharbanda, Shabana Azmi, Smita Patil, Raj Kiran and Rohini Hattangadi. A film-maker (Kulbhushan Kharbanda) who is having an extra-marital affair with an actress (Smita Patil) decides to leave his wife (Shabana Azmi). Arth is the story of this women's search for her identity.


Even though she is an actress, she is still wearing wearable clothes - Tanvi

The house was filled with wicker furniture..even the couch felt very lived in - Flo

Ghazals were not a part of hindi movies per se - Tanvi