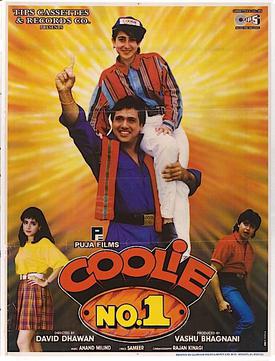 Coolie No. 1 is a 1995 Indian Hindi comedy film directed by David Dhawan. The film stars Govinda, Karisma Kapoor, Shakti Kapoor, Kader Khan and Sadashiv Amrapurkar, with music by Anand-Milind. In order to avenge his insult against wealthy Hoshiarchand Choudhary; Pandit Shaadiram Gharjodhe asks Raju (Govinda); a coolie by profession to masquerade as a wealthy business tycoon so that he can get married to Choudhary's daughter Malti (Karisma Kapoor).(Src:Imdb) You can listen and subscribe to our podcast on iTunes / Stitcher / TuneIn or on YouTube. You can also listen to this episode right here on this player below.

Andaz Apna apna is slapstick but it doesn't tip over to the other side like this movie does. -Tanvi


My notes page is blank - flo


This was pre-Manish Malhotra Karisma - Flo