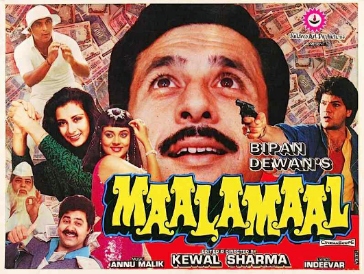 Maalamaal (English: Rolling in Money) is a 1988 comedy film starring Naseeruddin Shah and Satish Shah, directed by Kewal Sharma. Raj, a small-time cricketer, discovers that his grandfather has left a property of 3.3 billion rupees for him. But the inheritance comes with a clause that it would be his only if he is able to spend 300 Millions in 30 days. Raj, who has never seen so much money has no idea how to do that.(Source:Wikipedia) You can listen and subscribe to our podcast on iTunes / Stitcher / TuneIn or on YouTube. You can also listen to this episode right here on this player below

Oh what wouldn't I give for that kind of money - Tanvi

Anu Malik has two n's in his name - Flo