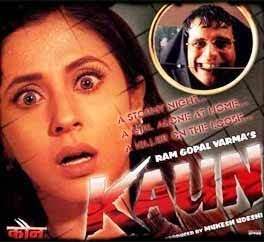 Kaun is a Hindi film directed by Ram Gopal Verma. The film stars Urmila Matondkar, Manoj Bajpayee and Sushant Singh. A young woman (Urmila Matondkar), home alone, is watching the news of a serial killer on television when the doorbell rings.(Source:Wikipedia) You can listen and subscribe to our podcast on iTunes / Stitcher / TuneIn or on YouTube. You can also listen to this episode right here on this player below.
Podcast Episode Summary:

This is a 90s movie which we actually loved-  Tanvi

You know that fashion is good when it's timeless - Flo

I think that this is her best genre - Flo

She's cute but she's scary..Her face is such a dichotomy - Tanvi