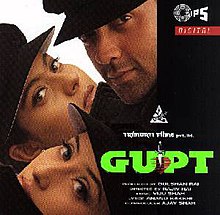 Gupt is a Hindi film directed by Rajiv Rai. The film stars Bobby Deol, Manisha Koirala and Kajol. Sahil Sinha (Bobby Deol) is in love with Isha (Kajol) and wants to marry her. However, his tyrannical father, Jaisingh (Raj Babbar), insists that he marry the girl he has hand-picked. And when Jaisingh turns up dead, Sahil, is viewed as the prime suspect. Sahil manages to escape from prison and goes looking for the real killer.(Source:Wikipedia) You can listen and subscribe to our podcast on iTunes / Stitcher / TuneIn or on YouTube. You can also listen to this episode right here on this player below.
Podcast Episode Summary:

I think it's the idea of Gupta that I liked - Flo

It's the most bizarre meet cute - Tanvi

In 90s, there was no acting..Everything had to be spelled out - Tanvi

It was the most basic way of story telling ...to a 2 year old - Flo